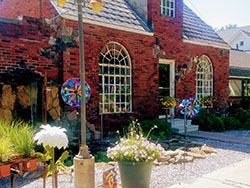 Mr. & Mrs. Winfield S. Kircher started in the flower business in 1908 at Rochester, Indiana. They later went to Attica, Indiana, until 1919, when they came to Defiance and took over the South Jefferson Avenue Greenhouse. The Kircher's operated a retail store on Clinton Street until completion on the present conservatory and retail shop in 1932. Mr. & Mrs. Richard Kress, daughter and son-in-law of the Kirchers, took over the business. Mr. & Mrs. Kress operated Kircher’s Flowers until July 1, 1968, when Bob & Carol Belau became the owners of Kircher’s Flowers Inc.

Bob & Carol started in the greenhouse business in 1958 in Oakwood, Ohio. They opened a retail shop in Continental in 1964.After opening another floral outlet in Paulding in 1974, they began to phase out the Oakwood location. In July of 1993 the Continental location was discontinued.

In 1990, Keith & Julie Belau, son, and daughter-in-law of Bob & Carol, took over the business. Keith & Julie are proud owners of a business with such proud heritage. You will find that they are maintaining the Kircher policy of giving their customers the best quality merchandise available.